Recent figures released by the LinkedIn Workforce Report April 2018 confirm fears raised in the 2018 SRG Salary Survey — that the UK will find it harder to attract and retain the best STEM talent post-Brexit.

Since January, when we first made our predictions for the biggest science trends for 2018, and released the 2018 salary survey, it has come to light that the most influential STEM subject might not be 3D printing in medicine, biosimilars or blockchain. Twenty-eighteen could turn out to be a year in which we have to work hard to retain the very people who inspire, build and develop these innovations.

One of the headline figures revealed by the SRG salary survey was that 40 per cent of people working in STEM thought that they would have to work harder to retain their staff post-Brexit. This appears to reflect the LinkedIn data. So far this year there has been a UK net outflow of professionals to the EU. Meanwhile, immigration to the UK since the Brexit referendum is down 26 per cent from Europe, and 22 per cent internationally.

Worryingly, the industries that have been heavily affected by Brexit include STEM specialties. As an industry that already has a skills shortage, this is not a huge surprise. But when you consider that a key part of the government’s strategy to boost the industry is to invest in research and development, this is a big concern.

Whilst only 9 per cent of people working in STEM thought that they would find it harder to recruit staff from outside the EU, looking at the reality of the situation, this may turn out to be driven by complacency. There are less professionals moving to the UK from the rest of the world. In the past year, placements from outside of the EU are down 20 per cent, with 28 per cent of recruiters indicating that they think that the UK is less attractive to candidates across the globe.

With a STEM skills shortage, this is not only worrying, it forces us to reconsider our approach to skilling up current residents — especially with people migrating away from the UK. Either that, or we have to bring new talent into the industry. One way may be, as we suggested last month, attracting and retaining more neurodiverse talent. 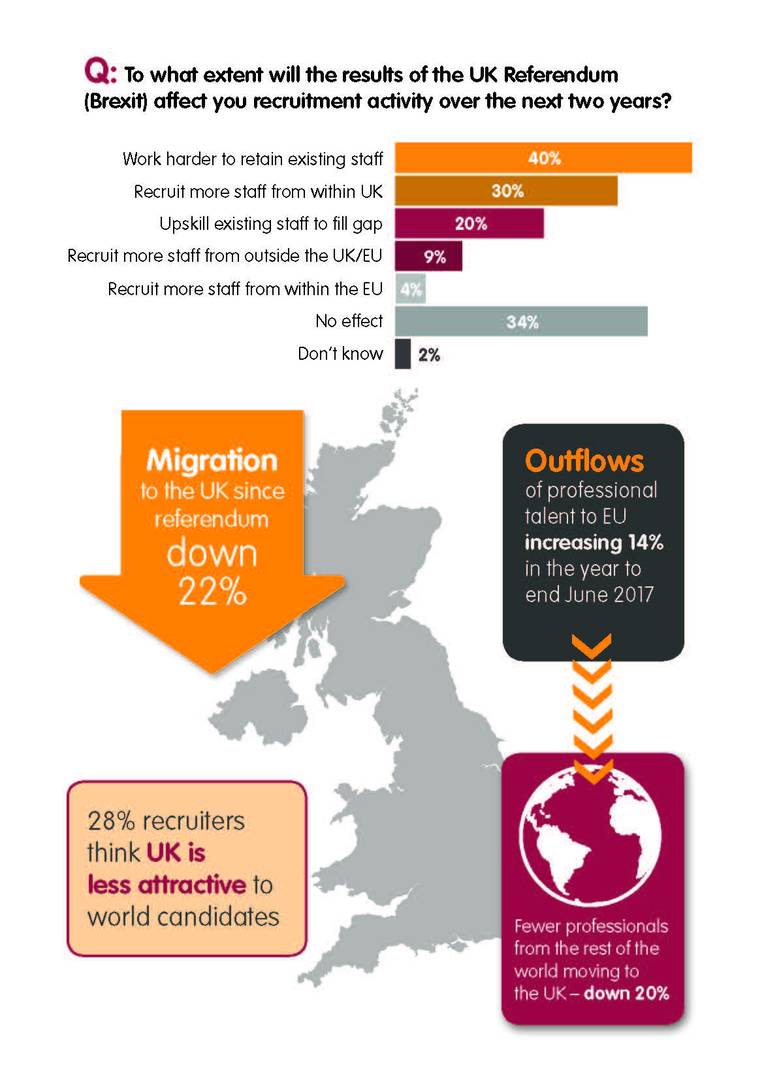 Industry and government initiatives are offering some answers. From better education, to changing the reputation of STEM, to introducing more apprenticeships, there is serious thought being applied to this long-term issue. Solutions, however, will need to be accelerated — especially if the figures supplied by LinkedIn remain headed in the same direction.

When the salary survey was first released back at the start of the year, it revealed that 34 per cent of people working in science thought that Brexit would have zero effect on the industry. The figures from LinkedIn suggest otherwise. Whilst it is impossible to predict what will happen once the final Brexit bill has been agreed upon — which could have a negative or positive impact, dependant on the outcome — the data suggests that it might be worth planning ahead from a worst-case scenario perspective.

If STEM, and particularly science and clinical are to thrive in the UK, we may have to rethink the way we attract, hire and skill-up our young talent. 20 per cent of life sciences workers predicted that they may have to up-skill existing staff to meet demand — those people might not have had a crystal ball back when the salary survey was released, but their prescience will likely have them one step ahead of the competition.

If you'd like to partner with SRG, want to hear about the latest jobs, or simply wish to discuss anything further, click here to get in touch with one of our STEM specialists.